Types of emergency lighting,LED modules built into luminaires for lighting

Lights&Lighting features a full range of emergency lighting: signage lighting; anti-panic and escape route lighting; central and self-contained systems, etc. We do not compromise on your safety: excellent recognisability, optimum light distribution and reliable electronics ensure that you will find the safest escape route even in the most difficult of circumstances.

These luminaires have been specially designed for escape routes and/or anti-panic lighting. Photometric optimisation allows the luminaires to be installed at large intervals, so that only a limited number are needed to ensure compliance with the standard. The luminaires are fitted with specific electronics for optimal start-up (and therefore long service life) of the lamp and low power consumption.

A LED module consists of a light source with LEDs, an electronic control and a battery set (in self-contained systems). It is unobtrusively integrated into a luminaire. In emergency mode, this LED provides the necessary light. Since the LED light is spread using a clever optical system, you will satisfy safety standards with a limited number of LED modules. The LED in the module is insensitive to switching and furthermore boasts a very long service life, as a result of which you will never have to replace them in theory.

The emergency lighting takes over the function of regular lighting in the event of a power outage. Emergency lighting can be powered in two ways. Depending on where the energy source is located, we refer to a centralised or self-contained system.

In a self-contained system, each emergency luminaire is fitted with its own rechargeable battery. Every self-contained luminaire Works autonomously and reacts independently to voltage drops.

During a power outage, the emergency luminaire will be switched on for a specific period. The autonomy of a luminaire is determined by the energy of the integrated battery. For most applications an autonomy of one hour is sufficient. Versions with a three-hour autonomy are useful when evacuation requires more time. 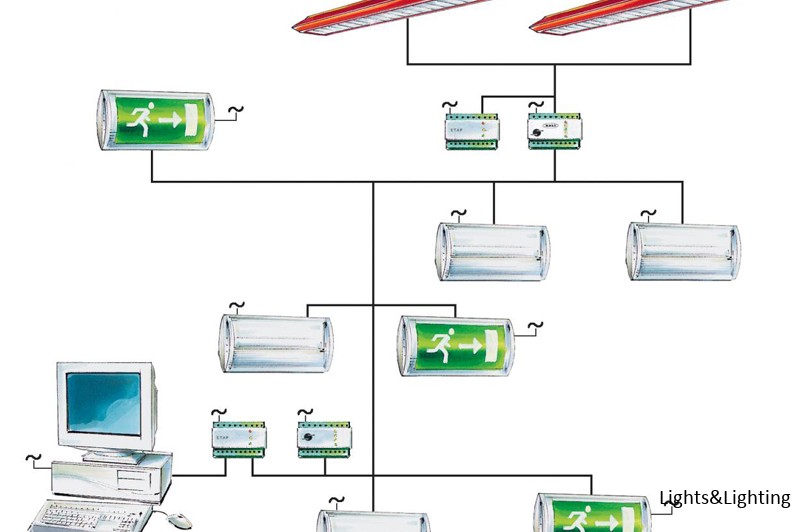 A well-oiled emergency lighting installation relies on regular checks. At Lights&Lighting each self-contained luminaire is fitted with a European Safety Test (EST+), which ensures extensive and frequent checks in compliance with IEC 62034.

Luminaires with an automatic self-test guarantee increased safety and offer significant time and money savings during functional testing. Without a self-test you are in fact required under the standard to regularly switch off the voltage and to check whether the luminaires still switch on after the specified battery duration has elapsed.

This is the lighting that is switched on once regular artificial lighting ceases to function after the power outage. In this way people can complete their work safely and without panicking leave the building. 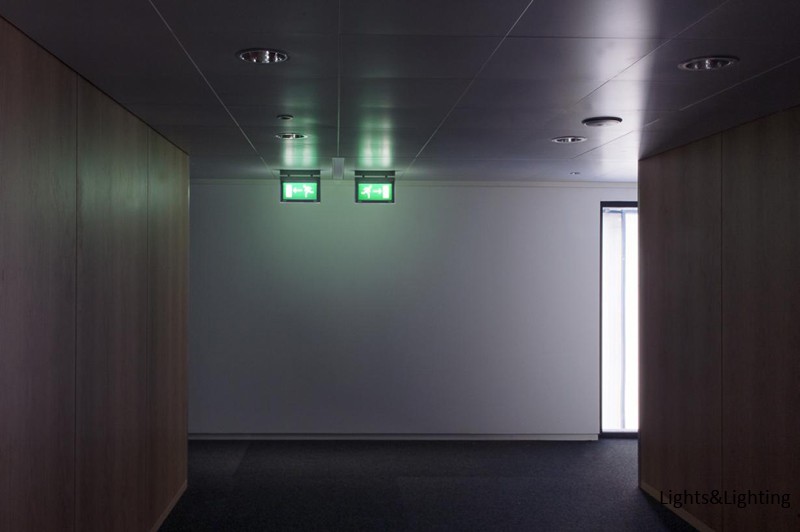 Safely evacuating a building is only possible if the escape routes are efficiently illuminated, including the outside of the final exit. 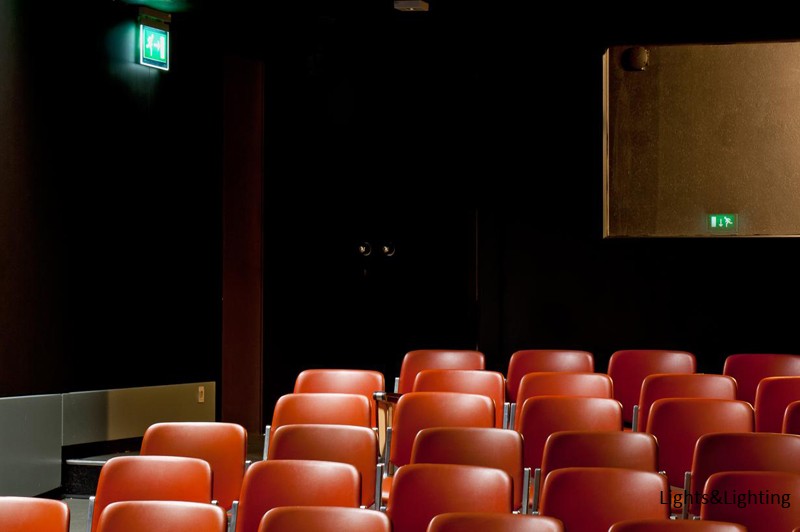 Safety signs point to the nearest escape route. High visibility and fast recognition of safety signs to escape routes are of vital importance in emergency situations. To this end, due to their universal nature, unambiguous pictograms have been identified in ISO 7010, which contribute to the smooth and safe evacuation of the building. In addition, by using these pictograms, escape routes can be recognised in the same way in every building. Colours must comply with ISO 3864.

Backlit signs can be more easily recognised at a greater distance than externally illuminated signs. EN 1838 includes a formula that determines the visual range (d) depending on the height of the pictogram (h) and a constant value (z), whereby:

Lights&Lighting offers a full range of symbols and pictograms in compliance with European guidelines. Lights&Lighting also produces an extensive range of information pictograms, identical in style, to identify amenities such as telephone, lift, etc. We can also design personalised pictograms for you, in tune with your house or building style, for example for crèches or conference rooms. 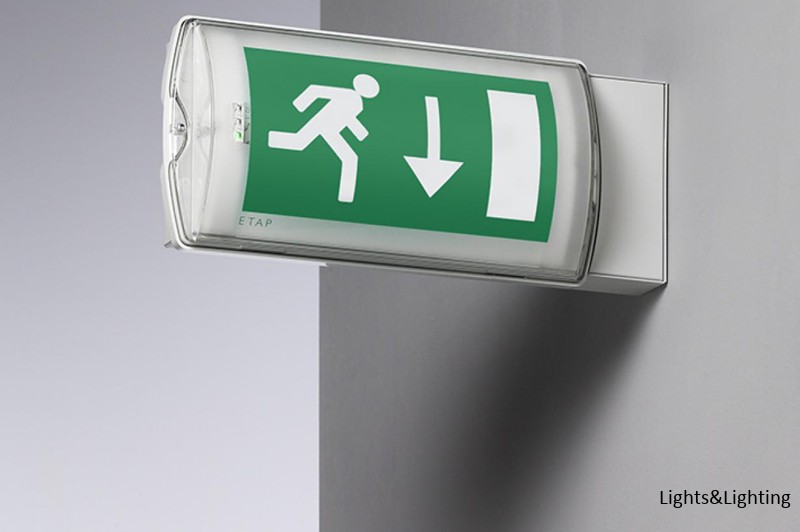 Lighting of workstations with increased risk

The lighting of workstations with increased risk (10% of the normal required level, never less than 15 lux) is aimed at ensuring safety in locations where a potentially dangerous activity is carried out. Dangerous workstations include, for example places with high temperatures, were harmful vapours are released, where moving equipment is stored or where high-voltage is used. 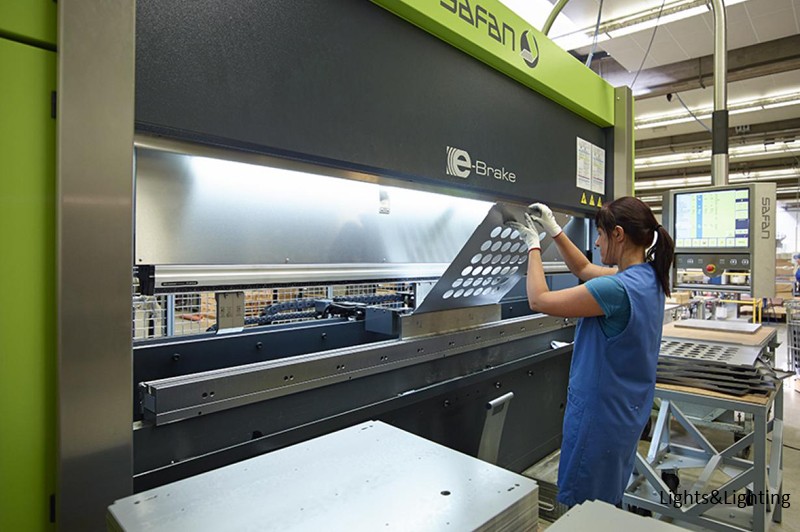 This illustration shows the required minimum horizontal illuminance on the floor depending on location and function in a building. In addition to escape routes and (emergency) exits, EN 1838 emphasises the following locations, which must be fitted with emergency luminaires:

Near staircases in order for each tread to be directly illuminated

Near any other difference in level

With every change in direction

On the outside of and near every exit

Near every first-aid station

Near every component of all fire fighting equipment and smoke detectors. 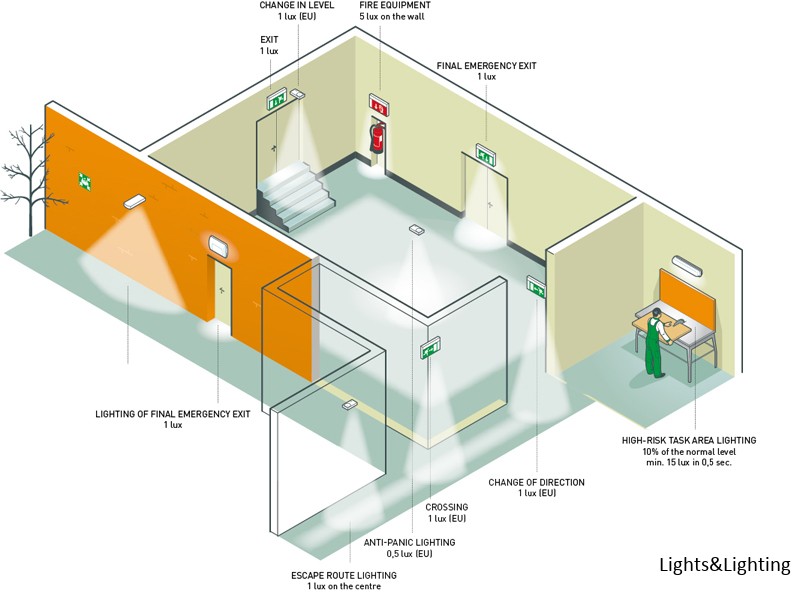 European standard EN 50172 requires, inter alia, a monthly functional test and an annual autonomy test for the emergency lighting, as well as logging of the checks and maintenance. With our self-testing luminaires with EST+ and their intelligent control and management system for self-contained emergency lighting Lights&Lighting Safety Manager (ESM), you will more than satisfy this European standard.